Microclimate and the search for a good night’s sleep

A good night’s sleep is essential for a happy life. A recent study from EBIA confirms that sleep scores a lot higher than exercise, healthy diet and a great social life as essential factors of life.

This study was one of the discussion topics during the latest NAVEM conference.  This discussion gave rise to the article (“Dit wordt meestal vergeten in de zoektocht naar een ideale nachtrust“, in Dutch) published in Knack Plus about the influence of microclimate (the temperature and humidity around the sleeper) on the quality of sleep.

In this article, published by Huntsman in SleepTech magazine, the use of the µClimat sensormat to measure the hygrothermal behaviour of a person sleeping on a mattress is described. This is a major aspect of sleep comfort in current mattresses.

While the pressure mapping of a visco foam mattress is known in the industry, the measure of hygrothermal behavior of a person sleeping on a mattress is relatively new. Little is known in public literature about the transmission of moisture and heat through mattresses. In collaboration with the test lab Custom8 (a spin-off lab from the Biomechanics Department of the University of Leuven, Belgium), Huntsman was able to develop a method to bench mark sleep comfort in terms of pressure distribution, as well as the hygrothermal behavior of the microclimate between the participant and the mattress.

The hygrothermal behavior of the microclimate refers to the change in temperature of the microclimate and the dissipation of humidity in the microclimate over time. The μCliMat is a patented sensor mat from Custom8 containing temperature and humidity sensors specifically designed for the use in layered flexible materials such as mattresses and car seats. With the μCliMat sensors, two full size mats were constructed to be able to do measurements of the sleep comfort with a test person of 80kg. Afterwards a 3D image was created by using the μCliMon software provided by Custom8

After Dusseldorf and Leverkusen, Cubiculum has opened a third sleep advice shop in Hilden. Cubiculum is not a classic mattress shop, but an innovative service provider. It stands for a completely new consulting concept around the topic of “healthy sleep”. Their sleep advice is focussed on your individual sleeping habits and needs. As a result, all relevant sleep data are considered and compiled into a personalized advice. The optimal solution for your individual needs is determined using various highly modern measuring methods.

Two of these measuring methods are provided by Custom8: a full body measurement with an Ikelo bodyscanner and a visualization of the fit between the advised sleep system and the body profile with an idoshape sensormat.

A good sleep advice is based on an interview and a measurement of the important aspects of the customer’s body. A good sleeping system will conform to your body, without sinking too deep into the mattress. It will also provide a good micro-climate (heat and moisture regulation) during sleep, and will account for any health issues.

Custom8 Will Exhibit at IMM COLOGNE 2015

We will demonstrate how our carefully developed and intelligent bedding components are used to create high quality body support for your customer.

Equilli is a new player in the Belgian mattress market offering personalized sleep comfort. They have developed a sleep advice system (Personal Sleep Scan) for their modular mattress range. It is based on the indentation measurement from the Idoshape sensormat.

why use indentation for a personal sleep scan?

A pressure measurement provides information about the contact pressure between the skin and the mattress surface. It is very useful in the medical field where pressure peaks should be avoided for bedridden patients. It is also used in mattress shops as a measure of the comfort level of the sleep system. However, it provides no information about the deformation of the sleep system and thus about the shape of the spine.The deflection measurement of the personal sleep scan provides the necessary information about how deep the important body parts (shoulders, waist and hips) are sinking into the mattress at different sleep postures (back or side sleeping).

Custom8 will exhibit at ISPA EXPO 2014

We’ll demonstrate our new products like the µCliMat and the IdoShape, and we will be available to discuss your needs and to answer your questions.

The competition, which is being organised by Koelnmesse in cooperation with red dot already for the seventh time, received a total of 200 entries from 16 countries in 2013. The specific goal of the “interzum award: intelligent material & design” is to put a spotlight on features such as innovative design, intelligent details, aesthetics and functionality.

Custom8 entered the competition with its new sensor mat for deformation (IdoShape), and received the “High Product Quality award”.

All the laureates will be celebrated on 12 May 2013. That is when manufacturers, designers and marketing decision makers will converge at the Koelnmesse site to celebrate the high point of this year’s competition together at the interzum party. The awards ceremony marks the start of interzum cologne 2013.

All prize-winning designs will be presented to the public in a special exhibition as part of the leading global trade fair. In this way, Koelnmesse is highlighting the significance of design as an engine of innovation. The winners of the “Best of the Best” category will be displayed on the fair’s boulevard in a walk-in square. In addition, the awarded products will be presented in the online exhibition at www.interzum-award.com.

more information can be found on the Interzum Award website

Come and See us at Interzum Köln

Custom8 will showcase its Interzum Award winning IdoShape sensormat. This sensormat, unlike pressure imaging devices, measures deformation. Think about it…. which is more important ? Pressure or Indentation ? Come and see our revolutionary new product.Interzum 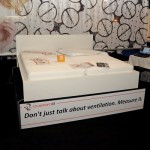 The panel wished to give an honourable mention to custom8 for the µCliMat sensormat. It is not a piece of furniture, but a very interesting innovation for the bedroom comfort sector, for the benefit of the manufacturer and retailers. The panel of the Furniture Fair Brussels hopes that the bedroom sector will make use of this expertise to achieve greater comfort for the consumer.